Green QE is not about green bonds 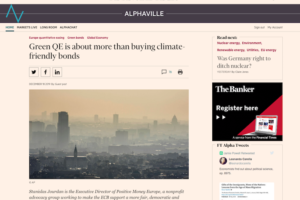 A recurring misinterpretation of “Green QE” is that central banks should restrict their asset purchases solely to green bonds.

This op-ed was originally published on FT Alphaville on December 18, 2019

The recent declarations of new European Central Bank president Christine Lagarde on the possible role of her institution in the fight against climate change have revived pushbacks from central bankers and financial commentators against “green quantitative easing”. However, the critics have often misrepresented what campaigners actually want.

Positive Money and other advocacy groups adopted the phrase “green QE” as a campaign slogan since 2015 – the same year that the ECB began purchasing bonds as part of its monetary policy operations. Yet one recurring misinterpretation of Green QE is that central banks should restrict their asset purchases solely to green bonds.

Take Fabio Panetta, candidate for the ECB’s Executive Board, who recently pointed out, given the small size of the green bond market, the ECB would very quickly “swallow-up” the entire available pool of green bonds if it were to focus its purchase on them. This objection is valid in the sense that the market for green bonds is indeed small for an institution that has so far bought more than €2.6tn in debt. It is also irrelevant as no-one is advocating that central banks should only purchase green bonds.

In defence of our opponents, the absence of a precise definition of “Green QE” thus far has made the debate somewhat confused and prone to disagreements. So what we want to do here is correct that by spelling out what we have in mind.

There are two points we want to make here.

The first is that doing QE does not have to involve a fundamental rewrite of the ECB’s rules. When Positive Money started campaigning with this slogan back in 2015, the message was that QE was an opportunity for governments to benefit from this massive monetary policy stimulus to step up green investment plans. This could be accomplished, for example, by establishing a large green investment programme led by the European Investment Bank, which the ECB could indirectly support by purchasing EIB bonds (as it already does to some extent under QE in its current guise). Unfortunately, the EU and member states did not take advantage of using the low interest rates provided by the ECB’s policy to scale up energy transition investments.

The opportunity has so far been wasted, but it is not too late.

The ECB should already commit to extending and scaling up its purchases of EIB bonds issued to fund projects designated as green by the upcoming EU standards. In practice, the ECB could do this by operating a “green twist” in its balance sheet: it would gradually sell its €480bn of private-issued bonds (or simply allow them to run off) in exchange for long-term green bonds issued by the EIB. Importantly, this would not require more – and should therefore not rankle with members of the council who have opposed the bond buying programme. In fact, the ECB could even shrink QE while maintaining a significant proportion of EIB bonds within its balance sheet.

We would emphasise that now member states have agreed to turn the EIB into the EU’s climate bank under the EU’s green new deal the timing is appropriate to consider this approach.

The second point, which follows on from the first, is that the quickest route towards aligning the ECB’s monetary portfolios with the objectives of the Paris Agreement is for the ECB to stop buying brown assets.

In 2016 as the ECB started the Corporate Sector Purchase Programme (CSPP), the conversation on Green QE took another turn. Positive Money was among the first to warn the policy would clash with the EU’s climate commitments. Indeed, as several studies have now established, around 63 per cent of the €200bn spent is geared towards the most carbon intensive sectors of the economy. The “do-no-harm” principle has, therefore, been ignored with high carbon sectors overrepresented, not least in comparison with the size of those sectors in the real economy.

The CSPP is only the most visible illustration of a bigger underlying problem: the ECB’s collateral framework – the rulebook defining what assets can be purchased under QE or pledged as collateral in refinancing operations, through which the ECB doles out cash to banks. Positive Money, alongside several other think tanks, academics and NGOs, strongly recommends that the ECB’s collateral framework should be revised to incorporate climate-related factors (including climate-financial risks). As some studies have shown, this would likely result in some of the most polluting companies becoming ineligible for ECB monetary policy operations (such as QE), or at least be subject to higher penalty haircuts.

One final word to our critics. We, like you, know that central banks will not single-handedly prevent the environmental crisis. Green monetary policy is no substitute to government-led policies — in particular the highly-needed carbon tax. But this does not excuse monetary policymakers from ensuring their own policies are consistent with the EU priorities, and (where possible within their mandate) actively supporting them.

We would add that while future carbon-price policies are being (slowly) negotiated and implemented, green monetary policies can complement government action by providing a powerful short-term signalling effect on financial markets.

The green QE slogan helped to highlight the role that the ECB can play in the transition to a low carbon economy. However, when discussing policy specificities, it is true that the term has become less useful. Looking forward, we’ll be more than happy to ditch the Green QE slogan if we can have a proper conversation on the specific policy proposals behind it. Now that the ECB will include climate change in its monetary policy strategy review, we will have to work together to determine precisely how to resolve the current misalignment of ECB’s policy portfolio with the Paris agreement objectives. And this — as we hope is clear from this article — goes way beyond bond buying alone.