7 reasons why ‪‎Brexit‬ may never happen 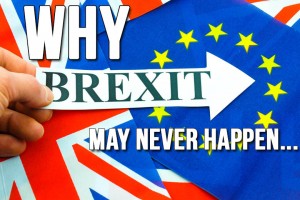 1. The referendum was advisory, not legally binding

2. The House of Commons may never ratify the UK-EU exit agreement

3. Similarly, Scotland or Northern Ireland’s parliaments may use their veto right to prevent Brexit.

4. The next Pro-leave leadership of the Conservative Party may never actually have the guts to trigger Art. 50. (Boris Johnson in particular, said it was not urgent)

5. Cameron’ successors in government may face no confidence motion triggering new elections. The new Parliament’s majority might turn out to be pro-EU.

6. Don’t forget how small the pro-leaver majority was (a few 4%). By the time an exit agreement is found (if ever art 50. is triggered!), the British opinion may shift towards remain again, making the whole situation completely absurd and negotiations impossible to carry.

7. With all the turmoil that brexit has created, the EU Council might eventually come up with significant Treaty change which would make this week’s brexit vote completely void (people voted against a certain EU arrangement which would no longer exist). At least a new referendum would be necessary.

Don’t believe the hype. The UK will not be leaving so soon, if it ever leaves at all. My take is: the more the process is delayed, the less brexit is likely to happen as the support & momentum for leaving will erode (or the pro-leave camp will divide itself on how to exit).

But whatever happens next, this shows again how much biaised this referendum was. For such important decisions, one would need a much stronger democratic process, including a bigger majority line and a clear timeline for when the country would leave (trigger art. 50).