The time has come for basic income 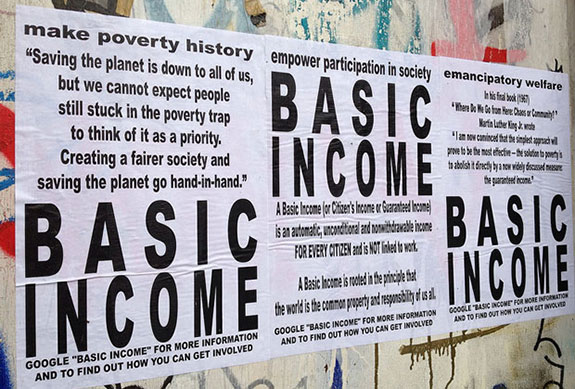 With the launch of the european citizen’s initiative for unconditional basic income, the time has come for basic income supporters to take action for the one of the biggest battle of History: the battle for Human Rights, Dignity, Democracy, the Commons… All at once reunited in the demand for a basic income.

I first heard of basic income three years ago. I was not looking for anything like this, neither interested into swapping my quiet life for the one of an activist. Rather, the idea came to me – and I immediatly adopted it.

Not that I personally needed a basic income. I am certainly part of this class of priviledged people who had the chance to born in a family that doesn’t live in luxury but lacks of anything. My parents could afford to pay my scholarship in a Grande École, pay my rents for five years, and eventually, there was a computer at home since I was a child, which got me very used to type on a keyboard, surf on the internet and accomplish a personal shift in my way of thinking.

I had nothing to worry about the future. My own future, at least, was secured. I would graduate in Entrepreneurship, launch my own business, and if it ever fails, with some efforts I would end up as a business executive in any company.

Why would I sacrifice this shining future for a vagabond life, rambling around, looking after avery single opportunity to change the World?

Because basic income is one of those “virus idea” that sows in you brain and keep reminding you how a better place this World could be “if only” we understood several simple reasonings such as:

Three years ago, we were no more a couple of guys around the web corner talking about basic income in France. Some of them called it “life income”, citizens’ income or “universal allowance”. Post after post, we would discuss hours and hours on the best way to finance it, the killer argument EVER to convince anyone.

But we had not understood yet the whole dimension of basic income — a Cultural Impulse.

“Basic income — A cultural Impulse” is the title of a swiss movie you can see on youtube and here in 23 languages. Most of all, the movie was an important driver of the basic income movement in Germany, Switzerland, and France, thankfully to the french dubbed version provided by the Swiss Basic Income Earth Network.

Basic income is a cultural impulse in the sens that the idea itself not only gives hope, but also convey a lot of values such as citizenship, trust, the Commons, freedom, dignity… Once you understand basic income, all these others concepts emerge as an avalanche of new perspectives on how society, economics should work. Basic income is not just another idea. It is an idea that indirectly inspires change, both at the personal level and in the interaction with people and society.

Gradually, people started to gather on the internet. Every new article in the blogosphere created new connexions between people, brought further attention. Eventually, it stimulated ‘in real life’ meetings, and very often ended up with strong friendships. Finally emerged a community of people sharing the same values, regardless of social background, political opinions, personal lifestyles.

For a long time, we had a common goal without a common strategy. With the presidential elections coming soon, many of us were expecting that finally some of the candidates would show up and bring the basic income on the table. No one did.

Then an email from Hambourg dropped in my mailbox. A european citizen’s initiative is being prepared on unconditional basic income. French folks, are you in?

That was back in january 2012. My contract at La Tribune just had ended, therefore I found myslef with some more spare time than ever, and some money on my back for a year. I decided to dedicate myself in making the movement reach momentum.

First meeting was held in Brussels in April with about 50 people from all over Europe. We got back in France with a concrete goal to challenge, and since then we have been working a lot France to organize the movement in France. We launched revenudebase.info, a news website about basic income. From there, we gathered lots of basic income supporters that before were scattered on the internet.

While waiting for the green light from the European Commission regarding the initiative, local groups were forming, events popped up here and there. We brought together people beyond political clivages. The success of the website even got some official recognition, when it was recently nominated for the “Best of Online Activism” Awards.

Learning by each others, we gradually turned our passion into positive action. We swapped impatience with courage. Our diversity became our stronger force. The community mutated into a movement.

At the forefront of the european battle for basic income

With the european citizens’ initiative being launched, I am now more than optimistic for the perspective of the basic income idea in Europe. Not that figures as so impressive. With 2% of the signatures required yet collected, we still have a long way to go.

But at least, a strong and positive signal was sent in Europe: an alternative idea is finally emerging in Europe to address the crisis.

We were 14 countries participating in the european campaign, yet now Portugal, Bulgaria, Romania, Hungary, joined their forces in the movement. Local groups are popping up all over Europe and beyond. In Tunisia, where a workshop about basic income was held at the World Social Forum, yet people are starting to work to raise the attention on the topic in a country which is still in the process of a revolution.

In the UK, while the british government have declared war on welfare, people are waking up for more radical ideas, People have started a guerrilla campaign in the streets of Hackney, London to promote basic income. Even famous columnists like George Monbiot are now pointing out the relevance of such a radical idea.

Of course, many countries are still not organized. But from my experience in France, I can tell you there are lots of simple things to start with and get the ball rolling. It’s just a matter of doing.

The bright side of basic income is the inclusivity of the idea. Even thought they think different on many other topics, radical leftists, degrowth partisans, ecologists, libertarians, conservatives and sovereignists, all of them will usually find some grounds that justify basic income. Hence the opportunity for basic income supporters to cooperate with each others and build up the pressure.

While I have been on tour for two months already in different cities of France and Europe,  I have not met yet a single opponent to the idea. Of course, many people still have a lots of  questions, some of them still doubt about feasibility and have concerns about some collateral effects. But they are not opposing the idea, rather they want to learn how to convince their friends.

So I wonder: who are the ennemies of basic income? Of course, here and there you’ll find people who don’t believe at all in Humanity neither in Democracy – and therefore will never agree on basic income. How many are they? After all, our ennemy might be in ourselves, hidden in our fears.

As Victor Hugo once said, “there is nothing more powerful than an idea whose time has come.”

Now is the right time to overcome our fears and turn the idea’s power into a wide grass-root social movement, a coalition of european citizens from right to left in order force our policymakers to have a say on the question of basic income. Only this kind of movement can be powerful enough to heat such an irresistible pressure onto our blind and deaf politicians – until they backpedal on obstinations for failure.

The European Citizen’s Initiative for unconditional basic income is only a first but necessary brick in the wall. Sign it here!