The trouble with Trade Unions 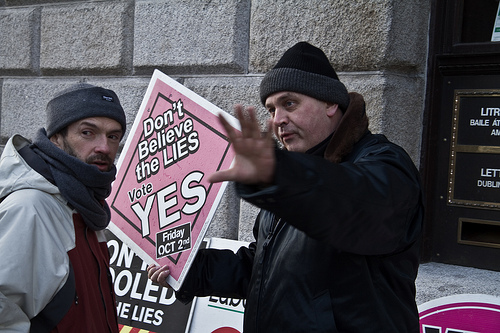 Beyond the fight for better labor rights, Trade Unions must widen their vision, work on tackling mass-unemployment by defending the unemployed as long as the workers.

Something must change in the “laxivism” of trade unions regarding other struggles than the one of the(ir) workers.

I am saying this after having been attending the Firenze 10+10 european social forum. During a specific four hours workshop on Social and Labour rights, an astonishing thing happened: not a single unionist from the panel of around 10 ones almost never mentioned the word “jobless” or “unemployment” (actually i never heard any word like this, but perhaps i missed some of them). Rather, the panelists all made similar endless speeches (during 4 hours!) describing how hard they find to fight against government criminalization of their activities and cracking down on Labour rights.

Sure, these are important topics that should be taken into account when criticizing the Unions. Obviously their jobs become more and more difficult in this times. But still, focusing only on the Labour rights (and not much on social rights as a whole), Unions are missing the bigger picture of the situation.

Trade Unions cannot afford to leave the jobless behind

Let’s not forget this: at the roots of the precarisation of workers is the fact of rising unemployment. It’s a simple question of bargaining powers: the more jobless there are, the more workers can be threatened by employers, since workers can easily be replaced by the reserve army that jobless take part of.

There is no need for being marxist to understand this: people in the precariat would mostly do anything to get a job, and in doing so, they are actually fighting against workers. Reversely, workers and unionist, while trying to strengthen their own rights, are actually reinforcing barriers to entry of the labor market, thus fighting against jobless and precarious people.

Long story short, how can trade unions can pretend to solve the problems of rising labor precariousness without tackling the one of mass-unemployment?

Workers precariousness and unemployment cannot be fought separately. As a consequence, the point that was totally missed at Firenze 10+10 is that Unions badly need to understand that mass-unemployment is also their own problem. As such, not only they have to defend workers’ rights, but social rights as well, so that situation of non-working people (wich actually represent the vast majority of population) is improved and can contribute to the change of bargaining powers.

The case for a basic income

Again, one easy solution for doing this would be the unconditional basic income : a grant given to everyone regardless of whether you’re working or not, and regardless of your means. The major point with basic income is that if it is high enough so that one can afford not to work but still live in dignity, then of course employers will find it much harder to force workers to accept bad working conditions along with low wages. Employees would just run away and live on their basic income alone.

On the side of non-workers, a basic income would induce less bureaucracy costs, less stigmatization, more feeling of security, more time for training, or more incitement for dedicating oneself to social useful activities (beyond paid-jobs only).

For trade unions, considering seriously the idea of basic income would also help them having a better understanding and judgement of the productive trends of tomorrow, and thus question themselves more appropriately whether every single job must be defended. Obviously, many industrial sectors are condemned to vanish with productivity gains. From the perspective of the unconditional basic income, this is not a bad thing though. On the contrary, this will thus free up human energies from repetitive tasks and dangerous low-paid jobs to other kind of more interesting and socially good activities.

No need to choose between workers and non-workers

In a nutshell, the remarkable thing here is that unlike Unions’ focused struggle for workers rights, a basic income would enable fighting for workers along with unemployed cohorts, students, pensioners, and general interest at the same time. But of course, it requires for Unions to widen their vision, and thus reconsider the rest of the World people as fully part of their own fight. This is not impossible though: the swiss Union SYNA, for instance, has provided its support to unconditional basic income.

Hopefully, a European-wide campaign on basic income will be launched in the coming months, and will contribute to create a real discussion among society on this topic.

(Beside note: what’s the point of general strikes when most people are already unemployed?)

PS: in the next post I will deliver further lessons and reports from Firenze 10+10.