The illusion of money scarcity 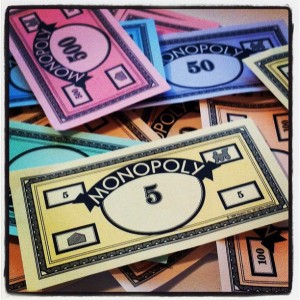 One of the main issue of today’s economic shift of paradigm is that most of  the people think like money is always scarce and has to remain so. This way, while the entire World is changing, we are still stuck into the old-fashion straitjacket of our monetary system, based on scarcity.

A revealing example of this is that many people fear that in case of massive sovereign debt write-downs, the European Central Bank would suffer so many losses that it would require a recapitalization, at the obvious expense of the european taxpayers. I always found this analysis ugly. Why on earth would an institution – which is in charge of issuing money – run out of money to operate? This is plainly absurd.

The worth-reading blogger Klaus Kastner also recognizes he was wrong thinking so. More interestingly, he relates that a ECB official, friend of him, made clear this would not happen:

The only problem would be that the ECB, with those huge losses, could no longer finance its operating expenses out of earnings. Instead, it would require support for that from governments and that is where politicians would try to get the ECB under their direct control.

Ever since my friend left, I have pondered what he had told me. My traditional banker’s brain has tremendous difficulty to understand how it could be that a borrower does not pay its debts but no one suffers a loss?

Or, put on Steve Waldman terms, “Insolvency is philosophy“: an institution is only insolvent if people believe so, not if it runs out of money. Same goes for the ECB: it will die if people stop using euros, not if the institution goes in negative equity.

No firm goes out of business because it’s shareholder equity goes negative. Firms die when they are presented with a bill that they cannot cover. But a central bank with liabilities in its own notes can never be illiquid, since it can produce cash at will to satisfy any obligation. It is book insolvency, not intangible goodwill, that would misrepresent the economic condition of the bank. If the central bank does not pay interest on reserves (which it should not), currency’s status as a “liability” is entirely formal. Central bank accounts should be defined by economic substance, not by blind analogy to the accounts of other firms. The purpose of a central bank’s balance sheet is to present a snapshot of its cumulative interventions, not to measure solvency.

The implications of monetary abundance

“Who in the world takes the losses when the debtors don’t pay their debts?”, Kastner wonders. There is not right answer, and no one can pretend he knows perfectly. Maybe everyone will loose, maybe no one.

Maybe the debt in question was a very bad debt that should never be repaid. Maybe this debt actually represent a creation of value from the creditor, and thus should be repaid or cause a great damage for the economy. The point is, there is no such thing as a “debt should always be repaid”. Why? Because, given debt is the ground of our entire monetary system, it is actually more of a social contract than just a moral obligation.

There is a bunch of people out there that think printing money is necessarily bad, nonsense, and dangerous. Actually, what’s on their mind is that money is necessarily scarce (otherwise peope don’t have incentives to work) and the pseudo evidence that “there is no such thing as a free lunch”.

But thinking of it, isn’t the whole life like a free lunch? Did you choose to live? Nope, that was given to you. Did you reward appropriately all the people that helped you from your cradle until now? I bet you didn’t, you parasite! Did you pay for the air you’re breathing everyday? I hope you don’t – you would go be in total bankruptcy!

As Götz Werner says, no one deserves entirely what he earns; since we get the most of our success from the confidence the others give us and others gifts provided by chance or the Earth.

Money is scarce only because the vast majority of people believe and behave like it is so. There is no evidence however that a different system would not work, quite the contrary actually (cf wikipedia, Debian, basic income experiments and so on).

Why would a monetary system (supposedly made for humans) be entirely different from how Humanity works?

PS: perhaps this is worth pointing out this post:

But, surely, you can’t just print money and give it away!

Er, yes you can. In a modern economy with a fiat currency system that’s exactly how money is created. It’s no secret; it’s just that the idea is so counter-intuitive that it refuses to sink into the public consciousness.

Of course, if you started to give the cash directly to the people, then they might finally understand that our entire economic system runs on funny money. And who knows what would happen then?