A monetary carnage in Greece 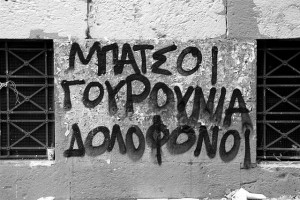 Just a quick update on this blog in order to highlight one very worrisome (and little discussed) fact about the Greek crisis: the plunge of the money supply.

How bad is it? You can have a look on this chart from the central Bank of Greece’s data:

As one can easily see, the money supply has dramatically shrunk since the beggining of the crisis in 2009. Several explanations can be brought here:

Welcome to the moneyless economy

What these figures mean is very clear: there is less and less money in the greek economy. No wonder why people are struggling, unemployed and homeless. No wonder either why they are not paying their taxes: they simply can’t.

Such a shrink of the money supply is a pure carnage for any economy whose money is based on debt. Clearly, how can anyone expect a recovery if companies cannot access to banks fundings? How can anyone expect people to find a job (or create jobs) in a moneyless economy?

From a monetary point of view, there is absolutely no hope for Greece unless a strong monetary stimulus is put in place (ie. money injection in the economy). Which of course, is impossible due to the ECB’s statuse and most of all, the dictatorship of the Germans’ orthodox views on money…

In these circumstances, would it be such an absurd idea to consider leaving the eurozone and thus being able to mobilize money printers to reintroduce a real currency for the people in this country?

Again, I refer my readers to these two earlier posts which include proposals and explanations:

how will i ever