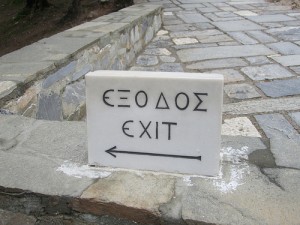 Should we fear the possibility of Greece to exit the eurozone? This is the opinion of many commentators, journalists and economists. But their arguments are often made of fallacious analysis based on poor knowledge of the situation.

The International press is getting a little crazy about Greece lastly. Sadly,when it comes to talk about a complex issue such as Iceland, Ireland or in the present case Greece, a lot of commentators usually get trapped by fallacious assumptions and bad logics. Here are at least 5 wrong or misunderstood assumptions that would need to be pondered.

This is probably one of the first argument usually agitated like a scarecrow to frighten people about a Greek exit. For instance, Vicky Pryce writes on the Guardian’s columns:

An exit from the euro would lead to a run on the banks and the collapse of the Greek banking system.

While the argument that the banks would be in a very precarious situation is not untrue, one should not forget this simple thing: yet the greek banks are facing a huge bank run : 80 bn euros of deposits lost since three years. I am very surprised that the press i scurrently getting anxious about a bank run while this is a no-news. Actually, the more Greece delays its exit, the more people will withdraw their money by fear of a grexit to happen. 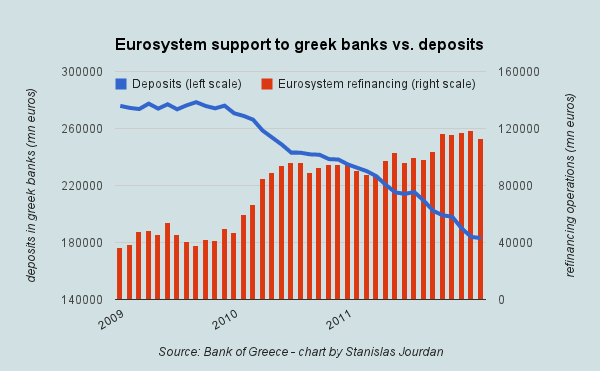 Moreover, partly because of the deposit flight, greek banks are already on the verge of a collapse. For some time now, their liquidity relies on the generous support of the ECB and then the Bank of Greece through emergency liquidity assistance. So, saying that the confidence in the greek banks would shrink in case of an exit is actually pretty amusing since yet there is absolutely no confidence in the banking system. A greek exit would not be worse in this regards, quite the contrary.

If Greece had more room of manoeuvre regarding its monetary policy (ie. by leaving the eurozone), the government could quite easily restore the confidence  in the banking system. For instance by guaranteeing all deposits and/or recapitalizing the banks via the Hellenic Financial Stability Fund which would be funded from pure money creation by the Bank of Greece (so that taxpayers are not paying for it).

Note that this money printing would not be inflationary since it would simply replace the current liquidity supplied to the banks by central banks. Last but not least, exiting the eurozone (and temporarily the EU) would enable the country to implement capital controls and withdrawals rationing that would limit the bank run far better than what can be done today (ie. nothing).

The second famous argument is that the devaluation of the new drachma would lead to a sharp rise of import products in Greece, thus fueling inflation pressure in the country. Yep, so what? In case you forgot, one of the main problem of Greece is the lack of competitiveness of its national economy.

Do you think it is normal that you can find imported feta in Greece for the same price as the local production? This imbalance is seriously insane, and the euro is to blame for that. It accelerates the deadly spiral of recession, public and balance of payments deficits.

So yes, the devaluation of the new drachma would lower the purchase of power of the Greek consumers on the short term, but at least its production would now have more local demand. On the medium term, if Greece manages to rebuild its banking system, local producers could even start investing and exporting again. Tourism would be on the rise again, after years of decelerating output.

Basically that’s the concept of devaluation: on the short-term you have inflation, on the longer-term you have growth and trade surplus. But if you prefer to have recession and unemployment, up to you to choose the status quo.

3. “Greece will be isolated”

Greece completely lost its sovereignty with the Troika’s intervention. The destiny of Greece all depends on Hollande and Merkel decisions, the EFSF and IMF cash transfers, and the ECB willingness to support the greek banking system.

Moreover, no one would invest in the greek economy given the situation now. Almost all the banks have been withdrawing their exposures to Greece for a while. Even the privatization plan imposed by the Troika is set to fail because very few investor are willing to buy companies in a country subject to so much political and social instability.

So, what is the real situation of Greece right now if not a country diplomatically and economically isolated? If Greece wants to have an important role on the international scene, it needs to fix its own problems first.

4. “The consequences would be huge for the eurozone”

On the later one, I think there is a two-sides effect to consider. On the one hand, Portugal and Spain could be tempted to exit (but note that their geographical position makes it less relevant). On the other hand, it would also make pressure on the Northern countries of the eurozone. The Germans are wrong to be happy about a possible Grexit since it would actually be their “fault” if Greece has no other choice today but to leave. Their unwillingness of reforming the euro failed, and Southern countries would have more bargaining power in this regard.

About the losses, one should be cautious about the figures that pop up in the international press. I totally agree with Ambrose Evans-Pritchard on this one:

Like many journalists, I am bombarded with reports asserting that Greece would suffer near total collapse if forced out of EMU, with some claiming that GDP would fall by 50pc with inflation spiralling into the hyper-sphere.

These numbers are plucked out of thin air. None of the analysts know what they are talking about, and Europe’s political elites – the elites that created this impasse – know even less.

This is very true. A number of newspapers are throwing numbers like 1tn dollars (800 bn euros) without any strong evidence. My own calculations show external exposures up to 475 bn euros. I don’t claim I am absolutely right (I need to update the figures though), but you can see that there is no absolute truth on this matter.

In fact, it all depends on how the exit is managed. If the exit is negotiated properly, the losses could be limited and spread over several years to avoid a radical shock. In case of a hostile break up, that would be different. It also depends on how Greece manages to stimulate its economy after the exit. If it does well, it may be able to repay some of its external debt after some time.

As Evans-Pritchard says further, we have been told in the past that Argentina’s default would be disastrous, that we could not leave gold standard, and so on. Now we are told that Greece leaving the euro would be catastrophic. This is a leitmotiv in History that things supposedly impossible or unwanted eventually happen.

Lastly, as stupid as it may seem, I think we should not forget that we are experiencing a financial crisis. Our politicians are trying to convince us that we can solve the crisis without having anyone lose anything. This is a big fallacy. If we want to change our economic model, this implies somehow that yesterday’s winners will be loosers. Maybe it’s time for bankers and hedge funds to bear their part.

Trust me, I would like to agree on this one. Unfortunately, we are at the point where it does not depend so much on the Greeks willing to stay or not in the eurozone. At any time, the independent European central bank can decide differently, simply by cutting greek banks access to its market operations. Oops, yet the ECB started doing it.

At some point, the Troika could also stop sending more funds to Greece, as the political instability prevent the country from applying “the plan”. At least Roger Bootle gets it right:

Accordingly, it is likely, I think, that they would say: “It’s your choice: we want you to stay in the euro (which isn’t true yet has to be said) but you cannot do so on your own terms.”

If the Greeks did not yield, then they would be out. For if they don’t get the money, it isn’t simply a matter of not being able to honour their debt obligations (i.e. defaulting); they would not be able to meet their obligations to pay wages and pensions. Moreover, if they could not get ECB funding for their banks, then their banking system would face implosion. At that stage, the only way out would be to move to a system where they can get funding from their own central bank – in other words, to come out of the euro.

And the thing is, the less voluntary the exit would be, the worse it would be in terms of consequences for everyone.

How to make it an opportunity?

All in all, I think the relevant question is not that much whether Greece should leave or not, but how should it be done? How to make this possibility an opportunity?

How Greece should rebuild its banking system? What new monetary policy could be implemented in Greece in order to stimulate growth without creating new bubbles as the orthodox theories did? How can Greece relaunch its economy and reform the country without sacrificing social justice?

There are solutions for that (if you are willing to think a bit differently).