The first baby steps of a basic income movement in Greece

Since february, I have been traveling across Europe and met a lot of basic income activists. I though I would enjoy my rest time in France to share with you some key insights of the latest evolution of the movement in the countries I visited. Today, I start with Greece.

After a short trip to UK (which I will details further) I went to Greece for a full month of April, with the ambitious objective of kickstarting the campaign for basic income. It was probably the most challenging part of my trip, since I have been writing passionately about the greek crisis in the past, trying to explain it and pushing some modest proposals to solve it.

As I had discovered by then, despite of the harsh crisis and the quest for alternatives, the idea of basic income has not really spread in the country, thus making my job even more challenging.

I quickly got in touch with some key people that my friends introduced me too, among which the pirate party, which was of great logistical support (they even let me sleep in their office for couple of days). Most people I talked with were very receptive to the idea and several time I was spontaneously invited to talk publicly about the idea.

However, the practical feasibility of the idea in Greece sounds very weak. Not only the political will to implement a basic income in Greece is close to zero, but there would be so few marge de manoeuvre to do it anyway, given the state of advanced decay of the greek institutions, not to mention the lack of sovereignty implied by the memorandum with the troika. 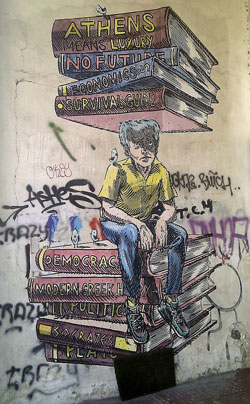 The bright side of it: the relevance of launching a european campaign was reinforced. The Greek people seem to have more hope in a change from the outside world rather than a revival from the Greeks themselves. And therefore, the growing european movement for basic income could become an important factor of hope (and possibly a revival) for greek social movements.

Just to be sure: I do not mean to say that the Greeks don’t already take action against the crisis. Many people are really active in building local solidarity, addressing the issues that the government can’t deal with, fighting back the fascists, censorship and the mediocrity of the media in general. However, things get more difficult when it comes to cooperating beyond the factions of each initiative. Social movements are pretty much scattered and that is why the Greek People is struggling to force the policymakers to adopt a new agenda.

“We are in middle of a bitter class war here in Greece” my couchsurfing host told me before I arrived in his place on my first day. It happened to be true. Basically, one key problem of the greek social movements is the lack of trust between people. It happened to be true. The thing is, there are just too many topics of divisions for the Greek people: should we leave the eurozone? About the EU? How to handle the bankrupt banking sector? How to deal with the immigration issues? Whose fault is this crisis? How to fight back Golden Down, the rising neo-nazi party? All these questions find different answers according to each greek person you may ask. “It seems like we don’t know if and how we wish to live altogether anymore” a greek friend concluded.

In this context, building a local group to promote the european citizens’ initiative for basic income was not an easy part. I needed to have each participant to believe that it could be possible to cooperate beyond the divisions that surely exist on other topics than basic income. Yet, our efforts ended up with a very productive meeting, at which the participants agreed to work with each others with the organization of a public discussion as a first step, with the notable participation of the economist Manos Matsaganis. Soon after, a website on basic income in greek was launched (not a single website on basic income existed before). 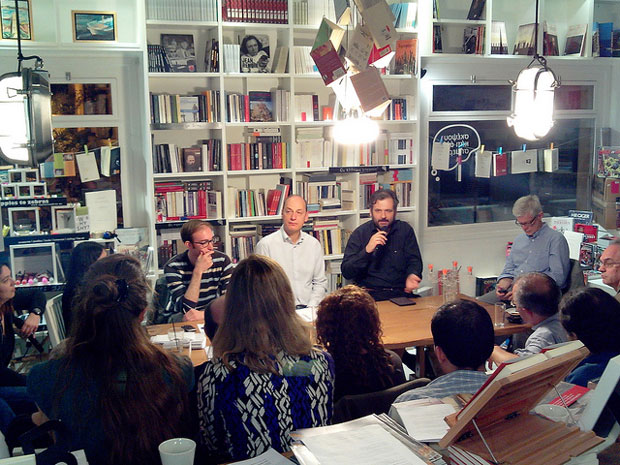 The movement has slowed down since my departure, but a conference with the prominent economist and political philosopher Philipp Van Parijs in on its way to taking place in Athens this fall. I am very proud of what we achieved in so little time. From my own experience: things can really go fast in Greece and this makes me very optimistic.

There are not so many ideas like basic income that could potentially bring people back together. This is your chance, Greece!

See the previous article in this series: