REPORT: Helicopter money as a response to Coronavirus crisis 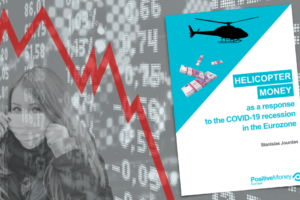 The Coronavirus crisis offers ideal conditions and strong justifications for the implementation of helicopter money by the European Central Bank. My latest report for Positive Money Europe outlines how to move this idea from theory to practice.

While many people are losing their jobs and their incomes, as a result of the lockdown measures taken by governments, proposals for “helicopter money” or universal basic income are increasingly being discussed globally. The White House is already planning to send checks to all American households, and calls for “emergency basic income” are also attracting significant support from citizens.

In this context of the Coronavirus crisis, the case for the ECB to deploy helicopter money has never been more relevant, and the political conditions are also extremely favorable. While summarizing the economic justifications for doing helicopter money during the post-Covid19 recovery phase, the added value of this report is to outline political pathways for implementing it.

The report was already featured in prominent European media outlets including La Tribune and Handelsblatt.

Key points from the report: