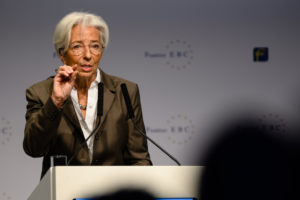 If Christine Lagarde is sincere in her conviction that the European Central Bank’s strategic review should be open-minded and “turn each and every stone”, she must persuade the Governing Council to open a discussion on helicopter money.

This opinion piece co-signed by Stanislas Jourdan and Eric Lonergan was initially published on Euractiv.com.

Last Thursday, the Governing Council of the European Central Bank announced the official launch of its review of its monetary policy framework.

Having failed to maintain inflation close to its 2% target for the past six consecutive years, such a review is a long-overdue exercise, which should allow the ECB to update its strategy to the new post-crisis challenges that the ECB is facing, including global uncertainty, the slow post-crisis recovery, technological developments and risks related to climate change.

The Governing Council will be guided by two principles: thorough analysis and open minds.

So far, most of the debate has been focusing on whether the ECB should redefine its inflation target, perhaps with a more flexible target and a stronger focus on core inflation. But while desirable, a redefinition of the ECB’s inflation target cannot restore the ECB’s credibility if it is not accompanied with an in-depth conversation about the instruments that the ECB could use to achieve its target.

Indeed, after having injected more than €2.6 trillion and pushed rates down into negative territory, there is a growing sentiment in policy circles that the ECB has exhausted its firepower. But has it, really?

As a guardian of the money creation process, it’s not like the ECB can run out of money. However, there is no need for the ECB to only transmit its policy through financial markets.

Indeed, while the ECB is famously prohibited from financing governments directly, nothing in EU law rules out the so-called ‘helicopter money’ idea whereby the ECB would directly transfer money to all citizens. Although helicopter money is not needed right now, it is time to have a serious look at it.

From a purely economic perspective, it is difficult to argue against helicopter money. Just like under budgetary policies, money transfers to citizens would, to a large extent, translate into consumption. With the equivalent 10% of QE, the ECB could transfer around €900 to all adult citizens in the Euro area.

If only 40% of this money is spent, the effect would likely be close to a 1% GDP boost. When a crisis hits, this would be a significant nudge to growth and confidence.

If helicopter money is certain to work, why has it not been done?

First, many are worried that such a policy would be a step too far for independent central banks, as it would blur the lines between monetary and fiscal policy.

As Mario Draghi rightly pointed out during his last testimony to the European Parliament “when you look at it closely, you realise that the task of distributing money to one subject or another subject is typically a fiscal task. It’s a government decision. It’s not the central bank’s decision. And you certainly wouldn’t want the central bank deciding who should receive the money.”

But this issue can easily be solved by setting out a clear institutional framework. For example, former central bankers Stanley Fischer and co-authors proposed last summer that helicopter money could be operationalized through a “standing emergency fiscal facility.”

Under such a framework, the central bank would decide “how much” stimulus is needed, while elected representatives could define “where to”. In this respect, the involvement of the European Parliament in the ECB’s review may prove useful to further design such an institutional arrangement.

In another contribution to this debate, Olivier Blanchard and Jean Pisani-Ferry argue that helicopter money is a distraction from the necessary revision of the Eurozone fiscal framework. “If there were to be a deep recession, it would most likely trigger the escape clauses in the fiscal rules, making helicopter money redundant”, they say.

It is true that a revision of the Eurozone fiscal framework would likely contribute to the ECB’s objectives. But however necessary, it is not guaranteed that more flexible fiscal rules – if ever agreed upon – would be enough to close the ECB’s inflation gap.

To maintain its credibility as an independent central bank, the ECB must be able to intervene in any circumstances. When the next crisis hits, if all the ECB has left in its toolkit is to call on fiscal policymakers to turbocharge their deficit spending, then the case for the ECB’s independence is of little relevance.

If Christine Lagarde is sincere in her promise to ensure that the ECB’s strategic review will be comprehensive and “turn each and every stone”, she must persuade the Governing Council to open the discussion on helicopter money.

By the end of its strategic review, the ECB should at the very least seek to clarify the conditions under which it would be appropriate to activate helicopter money, while consulting with other EU institutions to specify the governance framework which would be needed to manage its distributional effects.

Failure to do so will only maintain the ongoing ambiguity on the scope of the ECB’s powers, ultimately risking leaving the ECB with no other choice but to push ahead with even more unconventional monetary policy in the future while hoping the Court of Justice of the EU will – once again – pick up the pieces.

Fortunately, the upcoming strategic review offers an opportunity to do better than muddling through the next crisis as unprepared as the last one.