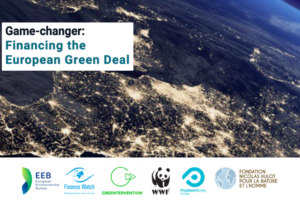 Aaddressing the threat of climate change requires a major shift in how financial resources are allocated. The European Commission estimates that at least 180 billion euros of additional investments per year are needed during the next decade in order for the EU to reach its climate targets.

In this briefing, prepared by representatives from six civil society organisations (European Environmental Bureau, Finance Watch, WWF Europe, Greentervention, Positive Money Europe, Fondation Nicolas Hulot), we formulate a series of comprehensive recommendations which are required to equip the Commission with a financial framework up to the challenge that the Commission has tasked itself to.

Echoing Positive Money Europe’s proposals, the group of NGOs recommends notably to make better use of the current low-rate environment that exists as a consequence of the huge interventions of the European Central Bank. To make the best use of this very favourable financial environment, the EU should upgrade the European Investment Bank and use it – in coordination with national public banks – as a vehicle for launching a major green bond issuance programme. The ECB can support such initiative through quantitative easing – as it is already doing. By increasing its purchase of EIB bonds, the ECB could help lower further the financing cost of the EIB and national public banks and enable them to take more risks (e.g. fund uncertain R&D, new technology, experimental projects) and fund less bankable projects.

“We believe that a real, game-changing Green Deal is feasible in the short-term – but only if the European Commission can succeed in overhauling the conditions for both private and public financing.” the report concludes.