Christine Lagarde and the political nature of central banking 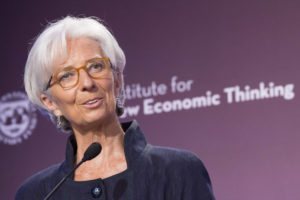 Critics of Christine Lagarde’s nomination as future ECB President argue central banks should be only led by academics and technocrats, not politicians. But this view is based on obsolete fictions about the nature of central banking.

This article was previously published on the website of Positive Money Europe.

After long hours of negotiations, EU leaders have decided to nominate Christine Lagarde as President of the ECB, alongside with other nominations to the key EU positions.

Assuming her appointment is confirmed by the Council after the consultation of the European Parliament and the ECB, Lagarde will succeed to Mario Draghi in November and become the first woman to lead the ECB.

But this isn’t making everyone happy. Critics are pointing out that Lagarde is not a trained economist, she does not have a Phd, and let alone, she has not been a central bank governor before. After all, Lagarde was finance minister under Nicolas Sarkozy. Politicians, they say, don’t belong to the central bank community.

While everyone may have their opinion on the views and qualities of Mrs Lagarde, her alleged lack of experience as a central banker is not, in itself, a valid reason to reject her appointment as next President of the European Central Bank.

First, the idea that the success of a big institution like the ECB will depend on the academic background of one person sitting at its top is an insult to the thousands of experts working in the staff of the ECB, and who are facilitating and preparing the decision of the ECB’s top decision makers. It’s not like Mrs. Lagarde will act alone, she will need and seek advice from the plentiful of technocrats around her and secure majorities within the Governing Council, which is composed mostly of senior (white & male) economists. There is no lack of expertise and experience inside the ECB.

In fact, it takes more than solid academic background to make a good central banker. Mario Draghi is an excellent example of this: he will likely be remembered for his incredible leadership skills, and his strong ability to communicate publicly, and to navigate in a very constrained political landscape. In other words: Draghi’s best skills were his political and diplomatic flair more than his expertise in monetary policy.

Form that lense, the appointment of Christine Lagarde ensures continuity in the style of leadership of the future ECB president. As IMF director, she has been known for her great ability to forge consensus. This quality will be very welcomed in the next years at the ECB.

Moreover, we would rather argue that the fact that Lagarde is not a monetary specialist is an asset rather than a liability.

As Positive Money Europe is arguing (in concert with other NGOs and think tanks) the biggest priority for the ECB will be to review its monetary policy strategy. This process will require more than just looking at robust economic data and reviewing a bunch of economic models. It will require from the whole ECB to embrace an attitude of self-awareness of central banks’ cognitive bias and groupthink, open-mindedness to unorthodox ideas and critical thinking coming from outside the central banking realm.

The fact that @Lagarde is not an economist can be an advantage when it comes to monetary policy, as she will be free from the dogmas that have plagued macroeconomics for several decades, that’s why @ESRC has put several million in @RebuildMacro https://t.co/E6ADXYCZ6M

It is obvious that such a delicate process will be better led by someone who is able to distance oneself from deeply rooted ideological monetary camps, and someone who has not spent the last 30 years studying, maintaining or even defending the current central banking framework. As Philippe Legrain writes: “And at a time when monetary policy desperately needs an overhaul, it can be helpful not to have preconceptions.”

The risk of politicization of the ECB

As we have demonstrated above, the criticism against Christine Lagarde’s pseudo lack of expertise is largely short-sighted and unfair. But below the surface of this argument, one can quickly find a much deeper worry. What critics of Mrs Lagarde are really concerned about is not so much the french woman herself, but the danger that letting central banks to non technocrats will eventually lead to a politicization of the ECB. To their defense, the fact that the appointment of ECB board members has been entangled into a “musical chair game” leading to an agreement on a package of other political appointments does not help.

The risk of politicization of the ECB is brilliantly explained by Erik Jones in a recent article. To paraphrase him, the trend to appoint politicians to the top positions of central banks is challenging the old paradigm of central banking, which, according to Jones, is made of three fictions:

The first is that the ECB will make better policy over the longer-term than political considerations would dictate in the shorter-term. The second is that the costs of ECB monetary policy decisions will not fall consistently on the same groups.  And the third is that disagreements within the ECB and its Governing Council are essentially technical and not political, meaning they are about how the economy really works and how it can best be managed, and not about who wins and who loses from one monetary policy decision to the next. These are fictions insofar as they rest on the assumptions that monetary policymakers are not politicians, that money is neutral over the longer-term, and that technical disagreements are somehow distinct (or distinguishable) from self-interest. The decision to appoint politicians to the top positions at the ECB because of their political skills challenges those assumptions.

In other words, by admitting that central banking requires political skills, EU leaders have just admitted as well that the ECB is not just a technocratic body which is delivering price stability by fine-tuning monetary policy based entirely on “neutral” scientific methods and empirical data.

Of course the notion that independent central banks are just technical bodies was always an illusion anyway. Money is a political object, and as such, institutions in charge of managing it are inherently political insofar as their policymaking are based on certain ideological assumptions about how the economy works, and should work. Central bank policies are not “neutral” for the economy and the political system, but they contribute to shaping markets, public discourse and other policy areas.

Arguably, the political dimension of the ECB is even stronger than other central banks, because it is not just managing a currency, but also serving a political project – the European Union.

The fact that so many central bank experts seem disturbed by Mrs Lagarde’s nomination is in itself a good sign. It shows experts are awakening to the fact that they don’t own the debate on the future of monetary policy. It’s a debate that belongs to all of us and not just the happy few.