Giving money to everyone without conditions is often said to be morally hazardous. Sadly though, this argument looks like another symptom of the famous Stockholm syndrom.

Yesterday, I (re)discovered that Professor Steve Keen was in favor of a “quantitative easing for the Public“, which concretely is the idea that instead of giving money to the banks through quantitative easing, central banks should give debt-free money to everyone so that people can repay their debts and thus deleveraging our financial system.

This proposal is actually pretty similar to what I call the distribution monetary dividend, except I argue this should be a long-term policy with the distribution of a periodical citizens income, while Keen seems to thinks this would be a one-shot monetary action like in old-times jubilees.

Anyway, I recommend you to watch this video in which Keen defends the idea at the BBC:

One interesting question raised in this discussion is the one about moral hazard: “You are rewarding failure!” the BBC journalist argue. 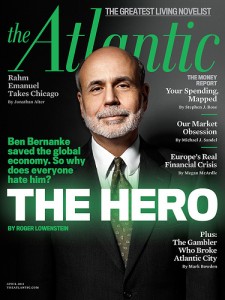 Duh. What the central banks and governments have been doing so far if not ‘rewarding the failure’ of… banks? What are the banks bailouts and quantitative easing about, if not a huge moral hazard?!

I hope more and more people now realize what QE is all about: giving money to banks and hoping they will lend again in the economy. Not only this has proven to be ineffective, but worse: large-scale assets purchases have indeed push some financial assets prices up, making the rich (who own the largest slice of them) even richer. But sure, there is no moral hazard here. After all, they probably deserve it?

Second, we also know that bailing out the banks do not make them less risk-appetite nor safer (look at this paper by the Bank for International Settlements). But sure, saving the banks endlessly through easy money and bailouts have nothing to do with moral hazard.

So, when talking about moral hazard, one should always consider things in relative terms: OK, perhaps not everyone would “deserve” to get a check from the central bank, but is it really worse than supporting the very ones that plunged us into this mess – bankers?

In other words, the point with giving fresh money to everyone is to avoid asymmetry. If we have to repair a collective mistake, then the solution must be collective – and everyone should be part of it.

The system is failed, not the individuals in it… If we don’t admit that we will spend another twenty years in this process.

Everyone would get a boost because we are not trying to boost individuals, we are trying to eliminate a mistake of the financial sector that has been going on for 40 years.

I disagree partly since I claim giving money to everyone with a basic income would be the best way to ensure a real free economy, with more equal opportunities for everyone. But let’s leave it apart for now since I mostly agree with him on the necessity of his approach.

Moral hazard used to be an argument for criticizing the banks attitude of taking too much risk because the government will save them anyway (too big to fail). It is funny (and scary at the same time) how some people can reverse the argument to the point of  giving a hand to their executioners.

Note: obviously, I am not criticizing the BBC journalist in particuliar – she is just reporting famous arguments against Keen’s proposal and thus offers him the opportunity to answer to it, which is great.