On Thursday, the Irish government announced that it reached a deal about the promissory notes issue, that forces Ireland to pay 3,06 bn euros on march 31st. But this deal actually does not defer any payment neither relieves Ireland from its heavy debt burden.

In France, the only newspaper that reported about this information was Les Echos. But their paper is such a misleading piece that i’m afraid they had better not to say nothing. Indeed, Les Echos committed  a significant number of mistakes, false assumptions, and misunderstandings that I’ll try to discuss in the following post.

The deal that wasn’t

In its very first sentence, Massimo Prandi (the author) claims:

Thanks to intense negotiations with its European partners and with the ECB, Ireland finally got the green light to a first rescheduling.

Even though the Irish government has been working a lot to get this kind of deal, the thing is, it did not get anything from the ECB and “European partners”. For a long time now, the ECB has been particularly reluctant to seal any kind of agreement that could constitute a bad precedent for market and financial stability.

Apparently, this has not changed, despite a curious statements from Michael Noonan:

I, and the Irish government, would like to thank all parties to these discussions for their constructive approach and positive engagement.

On its side, the ECB seems to discover they were part of any deal, according to this laconic statement issued to Reuters:

This, in my ears, sounds like a fait accompli rather than a deal… Or even no deal at all, since Bank of Ireland’ shareholders still have to approve the agreement (because the bank will act as an intermediary between the IBRC and the central bank, repoing an Irish sovereign bond sold to IBRC by the Irish treasury.

While detailing the substance of the so-called “deal”, Les Echos‘ reporter comes to saying that emergency liquidity assistance operations are risky for the eurosystem. However, while ELA operations are decided in accordance with the ECB, it remains on the sole responsibility of the National central bank providing the liquidity.

By the way, it’s funny that the “deal” precisely increase the risk on the eurozone since 3 bn euros of ELA lendings will be replaced by standard ECB repo operations.

Later, we can read that the deal received a lot of “perplexity” in the ECB’ staff, which is probably an euphemism. The ECB has been the strongest obstacle towards any kind of debt restructuring in Ireland.

In the following sentence, we can read some lyrism like:

Cute, but probably untrue. For some time now in Ireland, activists, economists, and normal people are standing up against the payment of these promissory notes and other bonds repayments to private investors. Pressure has been rising on the shoulders of the Irish government lastly about these issues, and the fail to reach any solid consensus with the ECB will certainly not appease Irish people’s discontent. 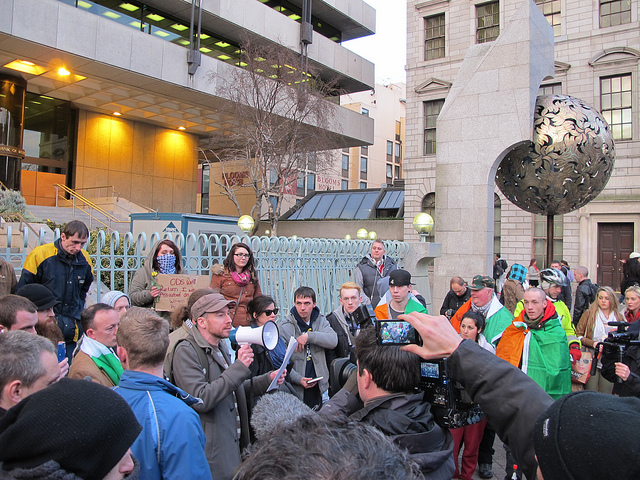 Protests in front of the Central bank of Ireland

There is a very definitive gain in debt sustainability.

As well as the Irish Finance minister statement:

The net effect of this transaction is to reduce the economic cost for the State as a whole of refinancing this payment.

Again, this is not true. “There will be an increase in Government debt of roughly €410 million, plus the cost of transactions“, notices us the Dublin-based economist Constantin Gurdgiev. Not to mention the deal will increase 2012′ public deficit by 90 millions.

A ‘deal’ for nothing

The end of the article is the most astonishing:

The other advantage of the agreement is to show the Irish people that Europeans are of good will towards their country. A key message while voters of the island are preparing to vote in a referendum on the Treaty European budget. The call to vote was set for May 31 Finally. The agreement strengthens the hope of Dublin to succeed in the ongoing discussions with the Europeans to renegotiate the terms of all promissory notes. Michael Noonan hopes to complete by the end of the year.

As I said before, this so-called agreements shows absolutely no “good will” from the ECB towards relieving Ireland’s debt burden. After months of negotiations, the ECB, which is the key-player in this game, has not moved one millimeter from its hard-line. It simply pretends that Ireland is doing good and that the plan is working out.

And there is still very little hope this will change in the future. Especially if journalists are not able to produce any critical analysis against political langue de bois…

Update: I just came across Le Figaro’s piece on the topic, which is more or less a copy-paste of the one commented here.