Debtocracy, a counter-story of the Greek crisis 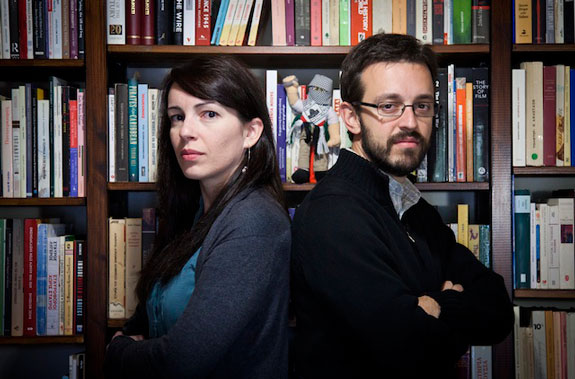 An interview with Aris Hatzistefanou, co-author of a documentary that dismantles many prejudices on the origin of the greek debt.

“Our government called us bums and our lenders “PIIGS,” just like all peripheral EU countries. Our ministers tried to convince us that all of us had a part in this”

Aris Hatzistefanou, 34, is accustomed to uncomfortable reporting. A journalist since his teens, his long-running show “infowar” on Sky Radio was cancelled just as his thought-provoking documentary, Debtocracy, was released.

Born in Athens, Hatzistefanou started his career at Sky Radio, hailed as the most popular radio station in Greece. His latest project was watched by one million people and had led to a successful nation-wide campaign to launch an audit on the country’s public debt. OWNI met the creator of the subversive documentary which shook public opinion.

What’s the story behind Debtocracy?

The idea came about during a Sky Radio show on how the Ecuadorian president was responding to the country’s massive debt. He started a simple financial audit of sovereign debt, and came to the conclusion that other countries were using Ecuador as a “slave”, like Argentina and many other countries before. The administration forced a haircut of 70% on its creditors.

Meanwhile, in Greece, the some people were seeking support for a similar initiative, and my program on Sky Radio had tremendous clout. Many people seemed to be wondering whether we could do the same thing in our own country.

Katerina Kitidi – editor in chief of TV XS – and I decided to produce the documentary. We faced a serious funding problem but, for obvious reasons, we didn’t want to ask any political parties, companies or – even worse – banks, so we resorted to crowd-funding.

It worked very well, we collected 8,000 euros in just 10 days, an unprecedented figure for a country like Greece, facing a serious economic crisis.

At the beginning this project was supposed to be a mere YouTube video. But because so many professionals offered their help (musicians, video editors), and so many people donated their money, it became a real documentary. The surplus was invested in promoting the movie.

It began with two people, but ultimately at least 40 people worked on the project.

How has Debtocracy been received so far?

We had more than half a million views in less than a week, and are now reaching 700,000 views. Despite its success, the Greek media did not report a single word on it. When they saw that we had half a million views, they could not pretend it didn’t exist – some newspapers started to attack and discredit the documentary. So far not one TV Channel has mentioned Debtocracy, not even negatively. The day mainstream TV channels talk about us will be the last step towards victory.

In a nutshell, what is Debtocracy about?

We argue that the current situation is part of a world-wide economic problem, as well as a eurozone issue. Because the eurozone is divided into the core and periphery, we are condemned to suffer from losses of competitiveness in the global economy, and we cannot devalue our currency.

What happened cannot be all blamed on the “PIIGS”- as they call us – although we have our share of the blame. The problem is that Greece created a welfare state without taxing more companies. So the deficit increased. We also have a problem of corruption, but those are details. Even if all politicians were put in prison, the crisis would remain unsolved.

We also argue Germany is not a model to follow – they freezed salaries for a whole decade! That is not a sustainable model for all of Europe.

Some people claim your documentary is not balanced. How would you respond to these claims?

We never meant to be balanced, quite the opposite, since our counterparts had enough time and media space to put forward their views. And they are not balanced either.

Critics also argue Ecuador is not an accurate example, because it’s a developing country and has oil. But oil only represent 25% of their GDP. Besides, we have our own oil: tourism. You could take any country other than Ecuador, and people would still tell you that these are two different countries, even though we face a similar situation with a growing debt and a similar “solutions” put forward by the IMF. In the end, they are just trying to divert the discussion to avoid talking about the main topic of the movie: the need for an audit commission.

In your opinion, what should Greece do now?

It’s clear that Greece cannot repay its debt – whether legally or not, regardless of the interest rate. 350 billions dollars doesn’t just grow on trees (and ironically, the market was the first to reach that conclusion). The government keeps on saying they will find the money, but the market is not stupid. The bailout plan designed by the European Union and the IMF was not about rescuing Greece – it was about saving the German and French banks which would collapse if Greece went bankrupt.

So our point of view is that we should not expect anything from them. It will be too late if we wait for them to take the necessary measures. We need to find the solutions ourselves and create initiatives.

Considering that, first we have to carry out the debt audit in order to distinguish what is legal or illegal. There are indications that a huge amount of our sovereign debt is pernicious or illegal. But only an audit commission could determine and prove this. This is why we completely support this proposal. However, it should be driven democratically and transparently, and not by parliamentarians.

We are more radical than others advancing this proposal, because we think we should stop paying the debt, exit the eurozone, and nationalize the banking system. That is not something easy to get support for as it may seem too radical – but even some politicians and economists from the center are beginning to consider it.

Are you linked to other initiatives of this type in Europe?

We were contacted by a number of groups and were asked to put subtitles on our film. At the moment, we are working on releasing it in several languages. We’re not collaborating with anyone per se, but we’ve released everything under a creative commons license (so that anyone can use our footage).

How do you envision the future of Greece?

Last year there was a lot of unrest against the bailout of the country, but Greek citizens are too disheartened now. In the past ten years, the opposition hasn’t come up with a decent proposal that could muster popular support. Some people believe that the unrest was appeased when the EU introduced interest rates in the bailout package. But I feel it is still growing underneath our feet. And it may be revived at any time.

It’s worth noticing that no political party has control over the protest movements, and no one is able to provide guidance to these feelings. So I’m afraid it will probably erupt suddenly and in a violent way, even though we cannot predict when and why.

As people were donating money, even once we collected enough funds for the movie, we decided to create a special account for them to deposit their donations, which we will return if we don’t come up with a detailed and transparent project within the next six months.

We didn’t expect such a success with so little means. It wasn’t easy, but we have proved to ourselves that big things can be done with few resources – especially when you have the support of talented people.

The Internet helped us a lot, but we can now see its limits. Though our documentary was viewed by nearly one million people, we must still reach an audience that lacks an internet connection, especially outside of Athens. We plan to distribute DVDs and organize projections in theaters and cinemas.With the Internet alone, our approach would end up being elitist.

We definitely want to go further, and address the taboos the Greek mainstream media dare not to report. If people don’t take part in the production and release of information, they’ll never find someone within big media corporations willing to speak on their behalf.