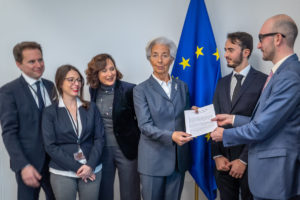 On December 2, I had the pleasure to hand over an open letter to Christine Lagarde, on behalf of 165 academics and civil society organisations. The letter calls on the ECB President to accelerate its efforts in addressing climate change throughout its monetary policy framework.

In September 2019, Christine Lagarde’s pledged to ensure that the ECB puts the “protection of the environment at the core of the understanding of its mission”. While the ECB has already taken steps in this direction, civil society leaders are concerned that the ongoing progress is “much too slow and we are losing time“, which motivated them to co-sign an open letter (pdf), which was coordinated by Positive Money Europe and Caritas-France.

The letter got a broad media coverage, including on the front page of the Financial Times, and several other national newspapers (Bloomberg, El Pais, Spain’s News, La Repubblica, The Times, Les Echos, Der Tagesspiegel, NRC).

“As the emergency response to the last financial crisis showed, central banks are not lacking in imagination when the situation demands it. Under your leadership, the ECB could deploy similar ingenuity in addressing the threats posed by climate change; by re-designing “Quantitative Easing” or refinancing operations to ensure they are supporting investments contributing to the green transition.”

On December 2nd, I had the pleasure to hand over the letter directly to Mrs. Lagarde who agreed to meet with with a delegation of signatories. During our brief interview she confirmed her intention to put climate change in the agenda of the ECB’s strategic review due to start in January 2020. Speaking later to the European Parliament’s ECON Committee, the ECB President said:

I just spent half an hour with those representing the signatories of the letter (…) and we certainly agreed to pursue the dialogue, because I need their input. I need their
understanding of the imperatives and the conundrum that we have to deal with.