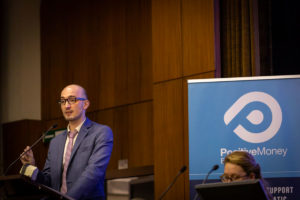 Opening speech given at the inaugurating conference of Positive Money Europe: “Time to rethink the European Central Bank?” on May 23 in Brussels.

Good evening everyone. It is a great pleasure to open this conference which we have been planning for quite some time. I am impressed by how many of you have joined. Thank you all for being here.

My name is Stanislas Jourdan, I am the head of Positive Money Europe. I have a lot to say about the European Central Bank, but given the limited time I have and the amazing speakers we have gather, I will try to focus on the key reasons why are building this organisation.

First, I think we need to draw the lessons of the Eurozone crisis. To the dismay of some populists forces in Europe, it is undeniable that the ECB played a key role in stabilizing markets and protecting the integrity of the euro. We should praise the ECB for that.

At the same time, the policies of ECB during the crisis came at the cost of having the ECB to make very controversial decisions, often beyond their usual mandate and with important political implications.

In Ireland, the attitude of the ECB resulted in a massive shift of around 70 billions euros  fo debt from the private banking sector into public debts and forced the government to request a bailout programme. In Greece, “technical” decisions made in Frankfurt possibly changed the course of the national government. The involvement of the ECB in the Troika and its support for austerity policies was also highly problematic.

Of course, my point is not to put all the blame on the ECB. Other EU institutions, and head of States, ministers in the Eurogroup, also share the responsibility for how the crisis was mis-managed in Europe. The architecture of the European Monetary Union did not make things easier, in particular in the absence of a central budgetary capacity. Because of all those pitfalls, the ECB was left with no choice but going into uncharted territory. Fair enough: a lot of other reforms – beyond the ECB – are needed to make the Eurozone sustainable.

Still, let me give you three reasons why we think reforming the ECB is key for the future of the Eurozone.

First, we have to acknowledge that the ECB is the most powerful macroeconomic institution in Eurozone. It has the power of creating money which is the ultimate weapon against disproportionate market panics as we saw in Europe.

Let us remember the words of François Mitterand and other EU leaders in 1992. They wanted to create the single currency to protect states from the « intolerable immorality » of States being « at the mercy of volatile capital ».

In the early stage of the crisis, the ECB did quite the opposite of that. It took 5 years before the ECB did finally launch quantitative easing, a policy which no other central bank wold hesitate to use if it was facing a similar crisis.

Mario Draghi’s pledge for doing whatever it takes to preserve the euro was a decisive moment. But will those nice words be enough in the future? There is an important question mark here because the ECB’s actions came at the cost of a loss of legitimacy. Today more than half of the EU population do not trust the ECB.

This is my second point: The loss of legitimacy of the ECB is a key problem which requires to be addressed. The worst thing we want during a crisis, is to have the legitimacy of the central bank being questioned to the point where it would be powerless to act. Central bank legitimacy cannot be taken for granted, it has to be cultivated and renewed.

Thirdly, even if you believe the ECB did an excellent job during the crisis, there are other reasons why we need to « rethink » monetary policy. Virtually all central banks around the world are having a hard time to achieve their price stability objectives. The low-inflation environment that we first saw in Japan in the 90s has become a global phenomenon. Today, interest rates close or below zero percent, to the point that many academics and commentators are questioning whether central banks still have enough ammunition to fulfill their mandates in the future. Others are arguing that since central bank are unable to fulfill their inflation target, perhaps we should change the target? In short, central banking – not just the ECB – is facing an existential crisis.

In our view, central banks should be allowed to use « public money creation » in order to stimulate the economy when private markets fail to do so. The independence of the ECB should not prevent cooperation with other public institutions, including for example fiscal policy.

For three years now Positive Money have been investing more and more time and resources to run activities here in Brussels. In 2015, we launched the “Quantitative Easing for people” campaign, in order to stimulate the debate.

By launching Positive Money Europe, we want to look for bigger issues. Our mission will be to make the ECB policies support a fair, democratic and sustainable economy.

Let me outline our four key priorities that we will focus on in the coming year.

First, we will keep advocating for making QE for People or “helicopter money” as part of the ECB’s toolkit. We believe that in times of crisis, a citizen’s dividend financed by the ECB would serve as a mechanism for absorbing and stabilizing the Eurozone against economic shocks and any sudden drop of aggregate demand.

Second, we believe the ECB should engage much more pro-actively in sustainable finance. While many steps will be required to get there, we believe there is an opportunity of using the powerful tools of central banks to accelerate the shift of global finance towards low-carbon investments. If we agree that the planet is our biggest asset, we must do whatever it takes to protect it.

Third, we believe central banks need to be forward looking and seize new opportunities that arise with new technologies. Since 2014 Positive Money has championed the idea of “digital cash”, which is now the subject of a widespread topic of discussions among central bankers. Mr Fernandez-Ordonez will elaborate upon right after my speech.

Fourth and foremost, we need to protect the ECB’s democratic legitimacy to ensure it can fight the next crisis. This will require new accountability mechanisms and more transparency. This should start with a review of how the future president of the ECB will be appointed. On the long run, we will need to open a conversation on central bank independence, with the view of modernizing and adapting it to the new era of low-inflation.

By building Positive Money Europe, our intention is to create a critically constructive voice on those issues. We want to channel the criticism against central banks into constructive & progressive political demands. As a result, we hope to contribute to renewing the relationship between citizens and central banks. To do that, we will also need more open-mindedness from central banks.

Positive Money Europe seeks to work with all parties and stakeholders groups with an open mind and for the greater good of Europe. It is not something we can do alone, we will need your support!

Ladies and gentlemen, thank you very much again for being here. I wish you an informative and enjoyable debate, and I look forward to meeting you later at the drinks.

Footnotes
1. Bernanke, Some reflections on Japanese monetary policy. May 2017

A full summary of the conference may be found here.