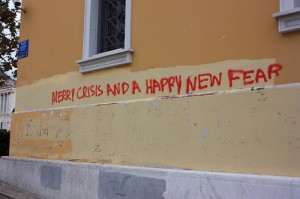 So the greek central bank just announced the cost of the greek bank recapitalization : 27.5bn euros just for the 4 biggest banks, 40 bn overall. That could even top at 50bn, the Bank of Greece admits. This represents about 20% of Greece’s GDP.

What a scam, isn’t it? Well, this is actually awesome: just by doing this, bankers are providing the best possible evidence to my argument that a basic income is perfectly fundable, even in a bankrupt State like Greece.

Given there are approximately 10.7 million inhabitants in Greece, and 12 months in a year, this means that we will spend exactly 315 euros per citizens monthly, just to prevent the banks to collapse.

This also means that instead of giving this money to the corrupt bankers, they could give every citizen living in Greece a monthly basic income of 315 euros. Let me repeat: 315€ to every citizen residing in Greece, children and pensioners included, without any sort of bureaucracy, no strings attached.

Instead of giving free money to bankers, they could stimulate the real economy with a direct cash transfer to ordinary citizens – the first victims of the crisis, and most of all the first who can change something in the country (since politicians apparently just can’t without worsening the situation from every point of view).

Some people will argue that recapitalizing the banks will make them stronger, thus enabling them to lend again in the economy. This argument is at least mostly untrue, if not a farce.

Remember that the greek banks are mostly relying on the liquidity fundings of the greek central bank  through the so-called “emergency liquidity assistance” scheme (ELA). At end-november, these special and quasi-secret operations reached 123bn euros (see chart below). 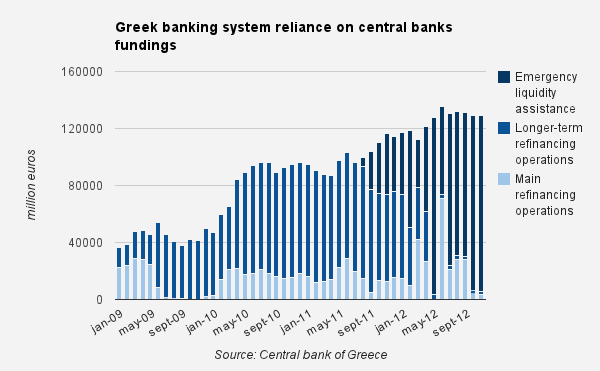 So, basically, just like Ireland few months ago, as soon as the banks get the money, they will directly repay the ELA lending (ie. not issue new credits in the real economy). In turn, the Bank of Greece will simply erase this extra credit line, and keep on doing as if nothing had happened. Business as usual.

Lost you? Just understand this simple fact: greek banks are just zombie banks : they are financially dead, but still exist to preserve the illusion that the system is safe. Giving them money will only serve to diminish the size of the big black hole the ECB has created by letting the Bank of Greece use its magic wand. Giving money to greek banks equals destroying money.

So instead, why not assuming they are printing money – and giving it to everyone – not just some happy few bankers?

Finally, basic income doesn’t look so costly when compared to the very costly mistakes of those preventing it to happen.