Last European Social forum was a failure in terms of convergence. How can Europeans citizens and civil society organization can join their forces for a another Europe? Here are few ideas on how to improve the next european social forum.

Ten days ago, I was attending Firenze 10+10, the seventh European Social Forum. This event was held ten years after the first social forum in Europe in 2002, which gathered a massive participation and relative success. This year though, participation was much weaker, and conclusions of the meeting were highly deceptive.

As you can see by yourself, the final statement of the social forum is pretty much a call for protests and further common action against austerity and in favor of more social justice. When it comes to concrete demands though, the statement is pretty much vague:

Social organizations, social movements, trade unions and citizens working against austerity and debt, for natural and social commons, for social and labour rights, for democracy, global justice and peace, for gender issues and migrant rights have gathered in Florence 10+10.

We call for a European permanent mobilization to support the fights against the crisis and build a future for everyone in Europe and in the world. This mobilization will include both convergence and decentralizes actions.

Obviously, many people had a sad feeling of defeat when leaving the Fortezza da Basso on Sunday. And I must admit, I was one of them.

Having been participating to the small workshop for writing the final statement of the forum, which is supposed to create convergence of ideas and struggles, I can witness that reaching consensus among participants was very difficult, if not impossible. Therefore, the final text we achieved to write was merely a call for participating in the coming general strikes and other protests around Europe, without any specific claims or clear message to send to policymakers, except the usual one against austerity. “If Miss Lagarde were here, she would be laughing at us” even ironised Susan George during a workshop.

I think however, that we should learn from this disappointment. And take action for the future. As an italian trade-unionist claimed during the final event (see the video), we have to “accept our weakness”, and work harder in the future for achieving a real convergence of our struggle. Another activist also nailed it: “this failure is a matter of methodology”.

And thus here is my take on how to improve it.

Every consensus is a victory: let’s track them 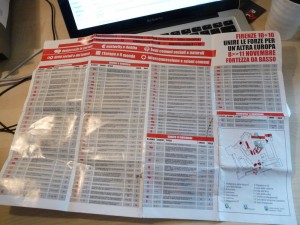 The Social Forum process it is intended to find convergences and consensus on different “alliance spheres” (topics): democracy, labor rights, Austerity & Debt, Europe and the World, Natural and social Commons and many other topics (see the whole program on the picture). Of course, it would be hard to exclude any of this topics: all are important. Nevertheless, one problem with this method is that obviously no one can attend them all.

As a result, no one can really know what’s happening in the others workshops. On top of this, we rely on people to report on the content of the parallel discussions, which obviously is a process highly weakened by human biais: one would generally tend to favors his own ideas or just forget some key elements of the discussion.

And of course, it gets even worse when you multiply this process during three days. You end up with a pile of very unreliable reports, from which a small group of people are then asked to produce a final statement. I was told that in the past, one final statement produced was so controversial that this finally ended up in a scandal. In such circumstances, the most fair and logical option is not to make any specific statement at all, and to “content” ourselves to a vague call against austerity, along with a list of key protests. And this was the decision we took this year in Florence.

The good news is, this process is highly improvable. In fact, this is merely a problem of lack of information tools.

Every consensus is a victory. As such, every single consensus should be celebrated and tracked into an information system provided for the social forum (think of something similar to liquid feedback). This way, the whole community of participants would be acknowledged about the results of the others workshop, and may have their opinions about these results before they are officially reported later during the forum. People attending other workshop could for instance express their strong objections, and thus a sort of “consensus quality index” would be produced.

That way, people in charge of summarizing the convergence would be given reliable reports and could then elaborate with them without betraying the very essence of these key agreements.

The need for transversal workshops

Another key problem with social forums’ methodology is that everyone tend to attend workshops he is the most passionate about. This tends to isolate concerns, proposals, and participants. And again, from the perspective of someone in charge of drafting a final statement, this makes it hard to find a final consensus since one’s own opinion about a proposal would interfere with the consensus found by other people.

In order to tackle this, multidisciplinary discussions should be held on the key proposals agreed by every thematic groups. These group would then provide an opinion about the proposals, which would then validate or not these proposals, and thus contribute to the “consensus quality index”.

In order to avoid biases in the composition of these groups, sortition should be the basic rule. People would be chosen randomly among each alliance sphere, thus ensuring diversity among each of them.

Identifying the roots of our disagreements

Producing convergence is obviously very important, but another aspect should not be neglected: disagreements. We need to identify them better, thus leaving the possibility for people to discuss them and maybe finally find a common ground of understanding.

Take my strong disappointment about trade unions’ strategy and vision. I never had the opportunity to express this view during the social forum. Yet I know that I was not the only one to be frustrated about the development of the labour rights workshop. If only we had the opportunity to elaborate our disagreements, maybe the debate would have evolved in a more constructive way. Perhaps we could have asked the unionists’ opinions about basic income. it does not mean we would have found any consensus, but at least, everyone would be aware of the explanations of why it is so difficult to achieve convergence. Further workshops could then be dedicated to these matters.

As we all know, disagreements are very often due to misunderstandings. Overcoming disagreements requires more time for discussion and better communication tools.