What can the World expect from France? 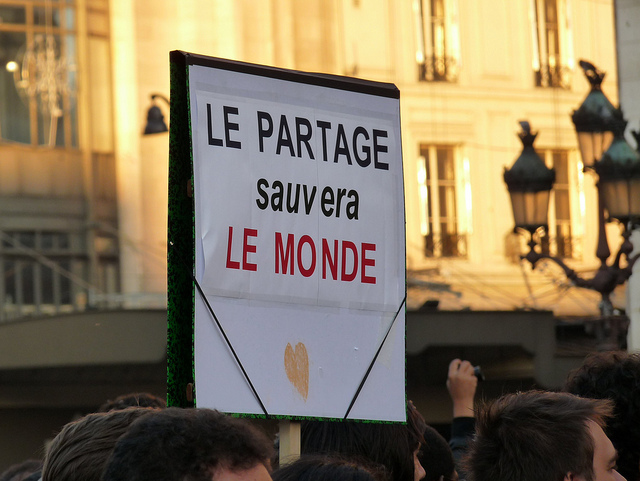 “Sharing will save the World”

Today is an election day in France. But don’t worry: nothing important will happen in the coming hours or weeks. So, rather than bothering readers with political stuff, I am going to describe what the candidates are not talking about: alternatives ideas to reshape our society.

Except for the dealings of Nicolas Sarkozy, and the turmoil of the french banking sector last summer and the coming presidential elections, France has been pretty quiet in this crisis. Since the big protests in autumn 2009 against Sarkozy’s pension reform, the French have not risen up like in Spain or Italy. The occupy / indignados movement have been much less important here than elsewhere.

One possible explanation is that the country has been suffering less from the crisis than others. At lest so far… Probably this is also due to our “generous welfare state” that protects the economy from deep recessions. But there is something more important than that: the sentiment that we are protected by our strong safety net make people think they shouldn’t complain too much, especially when looking at Greece or Portugal. And after all, the hope that Sarkozy will loose the elections is for many an incentive for waiting for this relieve rather than protesting from now on.

We will fight when our time has come

If I am sure about something, this is that the French people really feel that something is getting wrong about the global economic development. For instance, a recent poll showed that 60% of the French fear a greeky scenario for France. I am also pretty confident that if this were to happen, the French will not suffer in silence from austerity. In France, ‘acquis social‘ (vested right) is an expression that resonate a lot among society: it means that the French cannot accept to loose what they gained in the past. And because they would not accept an obvious and visible decline of our Society, they will fight somewhat.

It is common knowledge that the French are complaining a lot. The good side of it, is that we are actually very exigent, maybe idealistic. We want to improve the system all the time. And if we cannot, we want to change it. So, maybe there is something else you can expect from us : ideas. Among popular ideas that are currently emerging in France (and which I support personally), I would retain four : the basic income grant, alternative currencies, collaborative consumption, and sortition. Here are some explanations about them.

A basic income for all

OK, giving everyone a unconditionnal income is not a new idea neither a French one. The basic income has emerged all over the World last decades : notably in Belgium with Phillip Van Parjis, in UK with Guy Standing, and elsewhere in Europe (notably Finland, Germany, Spain) as well as in the US and Canada since the basic income is already a reality in Alaska. Why do I think the idea is worth spreading? Because it overcomes many of today’s world economic issues such as global unemployment, growth exhaustion, and ecological issues. 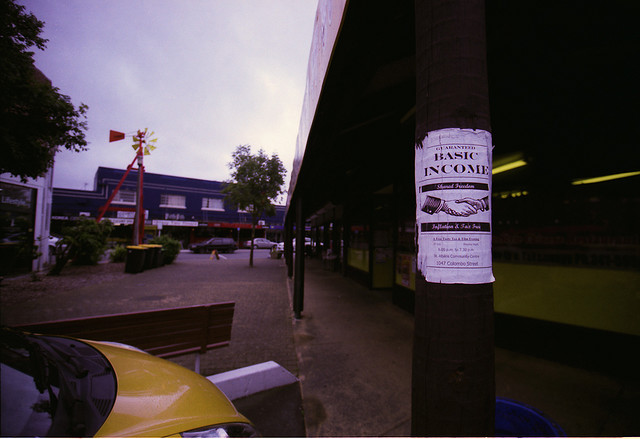 In a nutshell, the fundamental convictions behind basic income is that everyone deserves a share of the common wealth, simply because we exist as human beings. Also, basic income supporters often claim that full employment and perpetual growth is not a realistic economic target in today’s society. We consider that others forms or wealth exist behind the monetary transactions, which legitimate the basic income. For instance, a mother educating her child is creating a lot of value for society even though she is not necessarily paid for that.

One have to understand that the basic income is not like a traditional assistance grant since it is given to absolutely everyone, even the rich and workers who are already getting paid. Why? Because anyway, they will pay back their basic income through taxes. And because a means-tested scheme would require more control and bureaucracy. As a result, contrary to the idea that it could reduce incentive for working, we consider that the basic income will kill the poverty trap effect and make excluded people more likely to dedicate themselves to any social and economic activity.

In France, the idea is still a bit shadowed, but supporters are currently joining their forces in order to get heard by mainstream society. Soon, we’ll launch a website whose ambition is to gather all the different forces that are claiming for a basic income. Indeed, there are several organizations that are talking about it, but they never made any sort of coalition. The process is now in progress.

More broadly, a european citizen initiative is coming soon among EU countries. We hope this will help us to catch some more attention in France, like it did in Germany with a petition to the Bundestag that successfully got more than 50k signatures. Also, there is a german movie called Grundeinkommen that I recommend you to watch (here with english subs).

“Money is the problem and the solution”

Another topic getting traction right now is money. I mean, the monetary system. For some years now, and thanks to the crisis, more people are getting aware of the fact that our monetary system is built upon assumptions that are now obviously wrong. The fact that all our money system is based on debt creation is a big flaw in a stagnant economy and is not sustainable anymore.

A very good synthesis on this whole topic can be read at my friend’s Zoupic blog : Six things you should know about money.

So, one other solution that is currently trending in France (like in Germany, Greece, and probably elsewhere) is alternative currencies. These currencies are backed on other values than just the monetary value of assets, like under the eurozone. For instance, you can build a currency backed on time-value. In such a system, it’s much harder to get excluded. One can run out of money, but it’s much harder to completely run out of time.

In my view, the best alternative currency project is certainly Open UDC. This project aims at creating a bitcoin-like currency, with different rules however. The main characteristic of open-udc is to providing every recognized participant a basic income in UDC (universal digital currency), directly from money creation.

Indeed, the basic rule of open-udc is that no user should be privileged by the monetary system in itself, unlike bitcoin, where early adopters get richer when newbies get in. So, in order to address the problems of generation disadvantages and more broadly to prevent the practice of cornering the market, a little dose of money creation is permanently injected into the system, through the distribution of a dividend to everyone.

I have great hope that open-udc – when ready for use – will be one of the best currency ever. Why? Simply because giving everyone some money is the best argument to convince people to join the system and use that money instead of others. (nope?)

Another topic now trending in France is collaborative economy, also called collaborative consumption, sharing economy, gift economy. The very principle of this economy is that sharing is more important than owning things.

Car-sharing, home-sharing, co-working… all these new businesses are getting traction on the internet because it is a great way for people to save money by renting or sharing products or space instead of buying them by themselves. Which is ,by the way, no bad as well for our environment and natural resources. 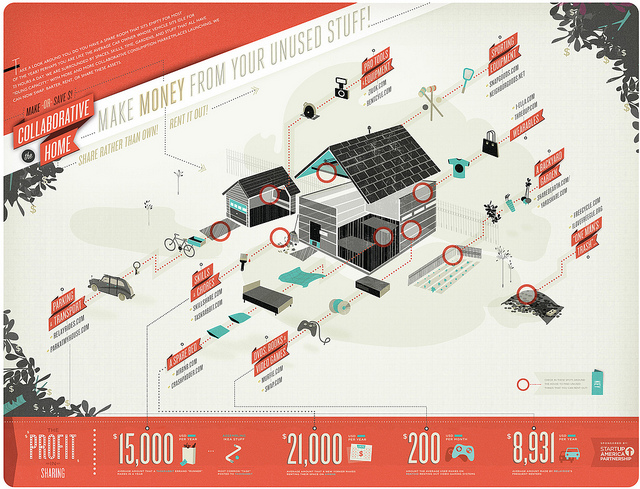 This is the future of the economy, not only because people are affected by the crisis and are trying to control their spending levels, but also because sharing models are creating new social ties between people. For instance, sharing internet cost thanks to a platform such as Wifis.org is a good pretext to meet your neighbor. With this first experience, you are probably more likely to knock at your neighbor’s door if you need a hammer for 10 minutes on Sunday afternoon.

At least in Paris, an interesting community (which I take part of) has emerged for more than a year now.It is formed by users, entrepreneurs, designers, writers and we called ourselves the Ouishare community. Soon, we will launch a media website that will offer insights, analysis, comments about this new trend. Our goal is to help this new economy to emerge by educating people and offering room for entrepreneurs to reach their customers, and be helped in the process. Also, we intend to help traditional companies to adapt their business to this new world.

Less economically, there is an other interesting idea now trending in France that might improve a lot our Democracy. Sometimes called Lottocracy or sortition, basically, the idea is that our representatives should not be elected, but rather selected randomly.

Sounds crazy, huh? Well, you may know that this system was actually one of the basic tenets of the Athenian Democracy, which lasted two centuries.

The advantage of such a system is that you cut off the liaisons dangereuses [hazardous relationships] between money, power and politics. For instance, it becomes much harder in such a system for lobbyists to influence members of parliament, because they don’t need any money for an electoral campaign. Moreover, because they didn’t choose to be so, parliament members are less willing to have political career ambitions. So, the people that would rule the country would probably be more interested in protecting the general interest rather than their own private ones. Not to mention, such a parliament would statistically respect gender equality and minority representations.

In France, the idea is championned by Etienne Chouard, a simple citizen though well-known for his activism against the European Treaty of Lisbonne, during the referendum campaign of 2005. His leitmotiv is that politicians cannot decide the rules of the institutions by themselves, because of the obvious conflict of interest.

Therefore, he is campaigning for establishing a new constituent Assembly which members would be selected randomly and would rewrite our constitution. If you are interested in the topic, I highly suggests you to watch this conference video called “Lottocracy: a bomb against oligarchy” (press CC button to activate english subtitles):

Nothing to expect from the elections

Don’t worry about the elections: there is nothing to expect from this mascarade. Whoever runs the country tomorrow, he will soon have to listen not only the global economic crisis, but also to the people that actually understand today’s society and have progressive ideas for our future.

I am confident that the ideas mentioned above will be part of it. Why? Not because I know the truth. Rather because I know a bunch of smart people that are fighting for change and will not give up any time soon. And also because I am one of them.

Have you ever heard about these alternatives? Are they popular in the part of the World you are living in? I would be interested to have your questions and comments about it: it will help me feed further posts!