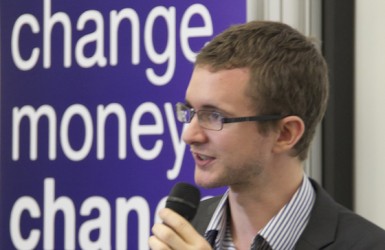 Here is the english version of an interview with Ben Dyson, founder of Positive Money, an action tank based in London that campaigns for a radical monetary reform.

This interview was originally conducted for MyEurop.

What does Positive Money advocates for ?

Basically, what we claim and denounce is the fact that the vast majority of money is created by banks. Over 97% of the money is created by the banks when they make loans to their customers. This means that if we we want more money in the economy, for instance in case of recession and a need of stimulus, then the only way we can do this is by going further into debt, through banks. That is why we have so much debt and that is why the economic situation is as such : we have too much debt, but in order to get away of these debts, the only choice is more debt…

There is no way of rescuing from this situation if we still depend on banks to create money out of debt.

Our answer is that we take this power to create money away from the banks. that would stop them using it to destroy the economy the way they did the last few years. That power need to be given back to the state. Now that said, you can’t give it to politicians because there would be too much of a conflict of interest : they would just use it to win the elections. So we need to give this power to an independent committee, probably at the central bank, that would be responsible for what the economy needs, that means creating money only when it does not create inflation.

What is the story behind Positive Money ?

It started when I was studying development and economics at the School of Oriental and African Studies, of the university of London. I was obsessed by inflation because i could not understand why prices were rising so quickly. One day i was at the library, and i found a book called “Grip of Death” which is the primary meaning of “mortgage” if you look at the latin roots of the word. That book was explaining how money was created by banks, out of nothing, in the form of debt. That made a lot of sense why housing prices were rising so quickly. So i read that and i thought “wow this is how the system works, then surely in the next few years this is going to collapse”. That was in 2006. The system started collapsing the next year.

In 2008 particularly, everything we could expect actually happened. And the whole time i was watching the news, i thought that soon the journalists would be talking about the way banks are creating money out of nothing. But they never did.

So in May 2009, i finished the job i was doing at that time, and went freelance, starting blogging about the money creation. It took about a year to have some more people following me and then we decided that we needed to turn it into a campaign. A loyal reader of my blog accepted to give us enough money for 6 months, so we could start from scratch.

We are not for profit, neither a charity organization. We tried to register as a charity, but because we have strong ideas they wouldn’t let us be a charity. So we are a non-profit organization. We are trying to get people to understand the problem with the monetary system.

What is your relationship with political parties ?

Even though we speak with different parties, we don’t have any affiliation with them. The whole idea is not about left or right, it is just common sense. We are trying to get them understand why the monetary system matters, why the issues they fight, like poverty or housing, are consequences of the monetary system. As long as they are not looking at that, they are loosing their time – and ours.

How do you build awareness?

The videos online are the best way, because a lot of people don’t have time to read now. So we use a lot of videos trying to make things simple and quick to understand.

We also program events around the UK, at which people that are new into the topic can come and learn how things work, ask questions, and have a discussion with us. We also worked on a book called Where does money come from ?, published by the New economic foundation. This book describes very precisely how the British monetary system works. The intention with the book was to summarize and certify what we are saying because all the textbooks are 20 years out of date. In order to write this book, we researched in the official documents and talked with the Bank Of England.

We only sold a few hundred books so far, but at least the feedback we have is positive and it gives us credibility. For instance, some people at the Bank of England told us the book is very good, and this is important to have a book like that, with a lot of informations, whereas others are quite misleading.

In your view, what should this independent committee do with this power ?

What we are suggesting is that the money should go to the government first, which would use it in different ways like reducing taxes, increase government spendings, pay back the national debt or even give it to every citizen through a dividend.

Well, a good way to fund a basic income would be by creating money, yes. But the basic income is not our proposal. Here we are just claiming that maybe the best option for an independent committee would not be to give it to politicians but directly to people so that we do not encourage an increase of public spendings. One thing to keep in mind is that the amount of money created every year is not flat. In the first years of our reform, the amount of money printed would be quite large because we are on a verge of a depression, but it would probably decrease in the next decade. So the government should not count on it and that is why giving it to people might be better. Another reason is that it would help people to pay back their own debt and stimulate the economy through consumption.

How the economy would be financed in your system ?

You would still be able to get loans to the banks, but they would need to take this money from savers and actually move it to your account, when you borrow. Which is not the case currently: they just type new numbers on you account and pretend to the others that they can withdraw their money at any time. So the banks would be limited in making loans by the money they have from savers and deposits.

How to make the transition to your system ?

We can make this changes in one currency : in the UK, the whole eurozone, or the US. There are two parts of the transition. First, an overnight change that should apply about 12 months after you decide to implement the reform: this step is pretty simple: you just divide the bank account of people into two accounts. The first one is the deposit account, where your money is perfectly safe because it is not lent to anyone. The second account is a saving account, in which you put your money in and the bank can use it to invest.

Then in the next years you’ll have a change in the landscape of the banking system. But first, one problem is that the banks might have created too much credit, and that there is not enough savings in the banking system. The thing is that you have to make sure there is a quick drop between the current level of credit and the new level of credit. So, to fill that gap, the Bank of England would lend more money to the banks until they balance their balance sheet by their own ressources. This makes possible a smooth transition.

How do you explain the fact that we went so far in the current system whereas it appears to have such flaws ? Is there a conspiracy behind all this as some people claim ?

No,  I don’t think there is a conspiracy. The thing is, most people, including politicians don’t understand the way the system works. This is quite a complex system so it is very easy for people to get distracted by certain aspects of it. Even people at the Bank of England, or politicians in the UK, even if they understand the system, they have never really considered the impact of debt on poverty, inequality, and such things. They get confused by small details and miss the bigger picture.

So again, this is not a conspiracy, this is just a problem of people that don’t understand the system. And moreover, they never really considered alternatives.

What have been the impact of your movement, so far ?

We held a conference towards 200 people from the parliament, thanks to the support and participation of two MPs. I think this is the first time that two MPs talk about such a monetary reform all over the world ! There are around 7,000 people that are supporting our campaign.

We went to the banking commission to talk about that, but they did not fully understand. Overall they decided to keep the current system and make so small fixes.

So we have been making progress over the last few years, but i think we have been losing time by addressing the politicians. So in the next years we will focus on gaining the public understand it because politicians won’t do anything about this until people understand.

Do you think the UK is more likely to change the system before the others ?

Yes, in the way that we are not in the eurozone, so we can make reforms more easily. However, the problem here is that our financial sector is very powerful and so close from the government that we have to do a lot of lobbying to change the situation. The bankers will do everything they can to keep the current system working.

In the public opinion, even thought our central bank as been intervening much more than the ECB without success to stimulate the economy, I think people still don’t get it. Even the journalists and the financial press don’t neither.

So what’s next for Positive Money ?

As i said, we have been focusing too much on the government people and lose time with them. So now, we are going to focus more on a wider audience.